All articles tagged with "Extreme"

Mistress Anna does not like people who do not make an honest living. She had to make sure that this guy changed his ways. She gave him an incentive to do so by making him eat her shit when she turned him into her human toilet. She used a make shift toilet seat to shit on him and it went directly into his mouth. He learned his lesson and stopped scamming people for a living.

Mistress Anna had forgiven her slave one too many times and now it was time for him to face the consequences of his actions. The mistress took him to her punishment room and she used an improvised toilet seat to shit into his mouth. She made sure all the shit ended up in his mouth and that he ate all of it and swallowed it before she let him go.

Mistress Diana punishes guy for being a bigot

Mistress Diana does not like people with bigoted views. She was somewhere where people were discussing issues and this guy had bigoted views about almost everything. Mistress Diana decided to punish him for it. She invited him back to her place and he agreed thinking she had a crush on him and wanted him to lay her. But he got a rude shock when she turned on him and punished him for his bigoted views. She turned him into her human toilet and had him eat her shit as punishment. 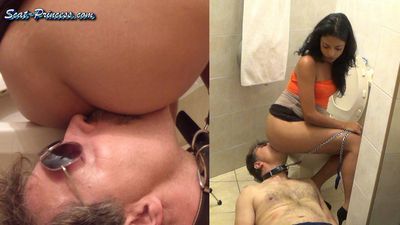 Mistresses punish guy for being full of himself

This guy was so full of himself and looked down on other people. What he did not know is that that was one of the things that mistress Cherie can never stand. She had to do something about it since they work together and they were bound to interact many times. For the sake of herself and her co-workers, she called him to her house where herself and her friend used shit to humiliate him and punish him. The mistresses tortured him and turned him into a human toilet to cut him down to size.

This mistress is a cruel one. She likes to use the most cruel and humiliating ways to punish a slave whether she is justified to or not. This slave was unlucky to be trampled painfully using her high heels and also humiliated by being shit on. She was punishing him for poor work done on a project she had handed to him. She wanted to make sure it never happened again.

Goddess Amirha and her shit fetish

Goddess Amirha has a thing for shitting on guys. She does not have a slave and does not need one. That is because she prefers to shit and humiliate and have fun at the expense of normal guys. Not slaves and losers. She went out and scored herself a hot date. She used her seductive and flirting skills to hook him. When he was wrapped under her finger, she became kinkier and kinkier culminating in her making him eat her shit.

Mistress Anna brought this slave specifically so that she could indulge in her favorite fetish, the scat fetish. But he was a newbie and she had to teach him. She made an improvised toilet seat where she sat and had him eat her shit. She in essence used him as her human toilet. She had earlier made him lick her shoes clean before she had him eat her shit like she wanted.

Mistresses and how they enjoy their scat fetish

These mistresses are scat queens but they are a different breed of scat fetish mistresses. That is because they like to indulge in their fetish as a group as opposed to as individuals. They like to do it in a party setting and have a slave eat all their shits and drink their pees as well as other disgusting things that they might want him or her to do to them. 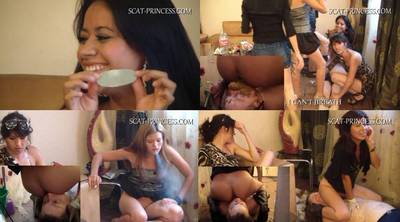 These two femdoms have set up their slaves as permanent toilets in their bathroom and have made themselves comfortable with televisions to watch. With the TVs on the wall and their asses on the toilets, the two let their shit and piss flow right into the waiting slaves' mouths as the lay beneath the bowls. No matter how much they want to get up, they are now a permanent part of the bathroom. 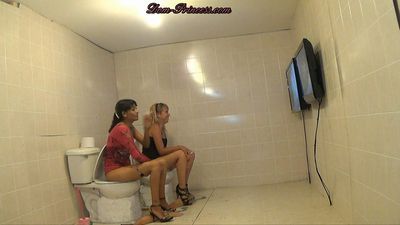